As autumn turns to winter, the last leaves drop and the cold, damp wind seems to slice through you no matter how thick your coat, I invite you to join me in a toast to an Irish chef from years ago…

One cold and wet night in January 1942, a flying boat left Foynes air base near Shannon in Ireland bound for Newfoundland and New York. The weather was terrible and the pilot decided to return to Ireland rather than risk the welfare of his passengers. The air base was notified by radio and staff were brought back to work to take care of the cold, tired travellers.

The restaurant chef, a man named Joe Sheridan, brewed fresh coffee and added Irish whiskey and a touch of brown sugar. Whatever then made him gently float some cream on each drink before serving to his chilled guests we will never know, but history was made that night.

When asked by a grateful guest if the coffee was Brazilian he jokingly replied -“No Sir, it’s Irish” In the years to come this mixture has taken the world by storm and given birth to many variations; it is also frequently ruined by a lack of understanding of the sheer decadent beauty of the original: Any bartender who tops his “Irish Coffee” with cream sprayed from a pressure can, serves his creation with rock sugar on a stick to encourage his poor guest to stir the damn thing into a pathetic, milky mess or provides his guest with a straw to slurp as with a milk shake should, in my opinion, get a job in an ice-cream parlour or doing something he has some feeling for.

And to you, dear guest, while I respect your right to drink any of my creations in any way you please, once you have paid for them, consider the experience you are missing and, if Marilyn Monroe can manage it without spoiling her lipstick, so can you.

I write this sitting by an open fire at home; my daughter has gone to bed, the various family pets are asleep in their chosen corners, Michael Bublé is singing about Christmas and yes, I am sipping a, if I say so myself, perfectly made Irish Coffee.

All the negative things about the temperature 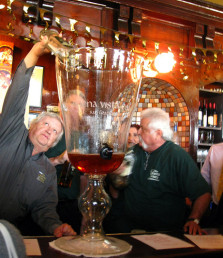 finally dropping past -5° (heating bills soaring, cars sliding around all over the place, frozen toes and fingers, and the irony of how the cold arrived a few hours after my skiing holiday ended!) is almost outweighed by the hedonistic pleasure of stepping in from the cold and sipping a steaming, warm beverage as the limbs thaw…..aaaaahhhhhh!

Coffee, tea and hot chocolate do, of course work well, but the whole experience becomes so much more pleasingly complex with the addition of booze 😉

To greet the chilly season I have been wracking my memory, leafing through old books and playing with diverse ingredients to find some warming alternatives to the Irish Coffee (seen here entering The Guinness Record Book) and will be offering you frozen people a number of steaming alternatives as you step through the door.

Welcome to The Bar! 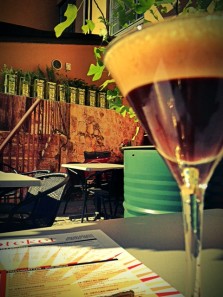 This summer as the temperature rises and the sun is giving us all that Mediterranean feeling, I invite you to come down to Enoteket and partake of a particularly Italian pleasure:

Sit yourself down in our little ”piazza” by the gushing waters, watch the folks going by and sip on a Caffè Shakerato, Italy’s answer to all the chilled and frozen coffee drinks that dot the market place.

Simple in preparation and presentation, this is a delicious, chilled espresso, sweetened and shaken to a light, foamy beverage perfect for those moments of summer contemplation. Served either in it’s original non-alcoholic form, our spiked with a shot of grappa or your favourite liqueur, the result is always pleasing.

So, come visit and enjoy some sweet Italian moments with us… 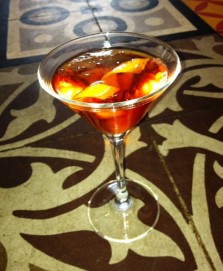 In 1922 Stephen Poplawski invented something we now take for granted in every bar, the blender. Apart from that, not very much has happened regarding the tools that a bartender works with since the first day one man stood behind a horizontal plank of wood and handed another man something to drink; until now..

Exploring the world of molecular mixology, I have recently invested in a new bar toy that allows me to do interesting things with some classic ingredients: Previously if you wanted a fizzy drink you had to add something with fizz, thereby diluting the mixture. Not anymore. I invite you to come and visit me at the Enoteket bar and try a wonderful new twist on and old classic: The Carbonated Negroni

I do not wish to detract from the original drink, which is one of the (in my opinion) best mixes ever concocted, but my little twist gives it a light, fresh mouth-feel while still allowing the premium brand gin and vermouth to shine.

Why not come and take a seat on our little patio one of these sunny evenings, order up a Carbonated Negroni, and drift away on the soft bubbles to a lazy, happy place?..

Welcome to the bar! 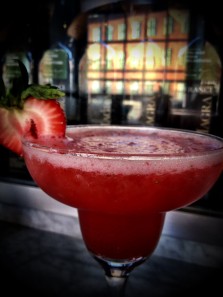 In this day and age of enlightened shopping, of searching among the available produce for those slightly better ingredients for the next family meal at home, of quizzing the waiter before ordering, of matching wine and food and delightfully discovering how fantastic it can be when one gets it right, I find it interesting how little thought is usually given to what the bartender may be pouring in your glass; the spirit base in a mixed drink or cocktail is so often rated only by the alcoholic effect it will give the consumer, and so seldom by the taste experience it will contribute.

Price is of course important, and I am not advocating pouring your precious bottle of Louis XIII into the afternoon punch bowl (but should any of you wish to try this I will gladly pop by for a sip or two!), but it can be amazing what happens to a drink when you take a couple of steps up from the cheapest available hooch!

This summer I am tweaking the Strawberry Daiquiri (among others), and the ingredients are simple:

Juice of 1 lime (pressed to order)

It will cost a little bit more, but I promise you will notice the difference

Welcome to the bar or try it at home

Visitors to Enoteket this evening may be excused for wondering if they have stumbled into some strange pool-party, as an inordinate number of towel-wielding space travelers may stop by the bar for some light refreshment. DON’T PANIC!, for today is International Towel Day, and said travelers are, like planet Earth, mostly harmless!

Welcome froods, to the Bar at the end of the Universe, and may your towels be with you! 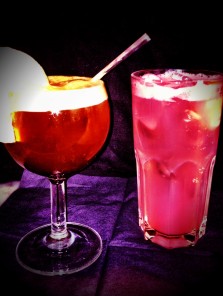 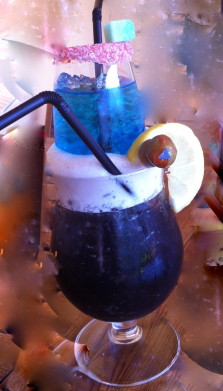 An important date in my bar calendar is creeping ever closer, one evening every year that I look forward to with a mixture of anticipation and dread. Each year it gets both easier, and paradoxically, more difficult…

There I was, doing my thing behind the bar one busy evening, when I saw a group of five or six coming through the door. My security/coat-check guy looked a bit concerned; there was something wrong with the picture that I could not immediately place. Then I got it: Apart from one head of shocking pink hair, one tall guy was dressed in pajamas, bedroom slippers and dressing gown! Nor was this all: Each one of them had a bathroom towel draped around their shoulders, and were peering furtively towards the bar.

Now, my bars have always attracted and amazing, wonderful mix of business suits, jeans and kaftans; my philosophy being simple: everybody is welcome so long as they behave themselves. But, even for my place, this looked like it could be trouble on the way!

Just as I was about to signal to the man on the door that this new party might be happier somewhere else, one of them broke from the group, came up to the bar, and somewhat breathlessly, burst out:

“We’ve heard that somebody here can mix a Pan Galactic Gargle Blaster!”

The drink in question is the fictional creation of author Douglas Adams, who gave us “The Hitch Hiker’s Guide to the Galaxy”, and is described as “the alcoholic equivalent of a mugging: expensive and bad for the head” and “like being hit in the face with a gold brick wrapped with a slice of lemon”. Years previously, at another bar, I had as a joke put my interpretation of this drink on the cocktail list, but I hadn’t thought about it for at least six years, much less concocted it. Suddenly now, I was to get my first experience of Towel Day!

Douglas Adams died on the 11th May 2001. Since then, two weeks after the date, on the 25th, his life and work is celebrated by crazies all over the world by donning their towel, getting together to drink “Blasters” and quote passages from the Good Book at each other.

This was all several years ago now and has become a yearly ritual at my bar with the faithful following growing from five to, at last count, sixty-five!

Not having a consequent recipe for this drink (I tend to forget it each year, despite good intentions), it has become a yearly challenge to out-do the previous year’s offering, with some very bizarre results.

Several of these “crazies” have since become my friends, and once again I think about the old wisdom “don’t judge a book by its cover”. How much fun and friendship would I have missed out on if I had stopped them at the door? And how I have wished on occasions over the years that some parties of “normally dressed folk” could behave with the sophistication, decorum and decency of these pink-haired, pajama clad space travelers!

Guys, may you always know where your towel is!

Many things have happened since last Towel Day, among them I have relocated my place of work to Enoteket. None the less the show shall go on, and I have already started planning this year’s event. I sincerely hope to see you all at Norrköping’s Bar at the End of the Universe on the appointed date!

What follows may, or may not, be a past or future recipe for the Pan Galactic Gargle Blaster:

Several measures of anything else behind the bar you want to get rid of and know, deep down, should not be served on the same evening, never mind in the same glass!

Blend some cream with blue curacao to create an unappetising grey glob that may be floated on the drink!

Serve in some unlikely receptacle, preferably setting fire to it first, and don’t forget the peanuts (Don’t understand? Read the book!).

Remember that the trick here is to serve something that is really going to hurt in the morning, but that just now actually tastes quite palatable.

So Long and Thanks for all the Fish!